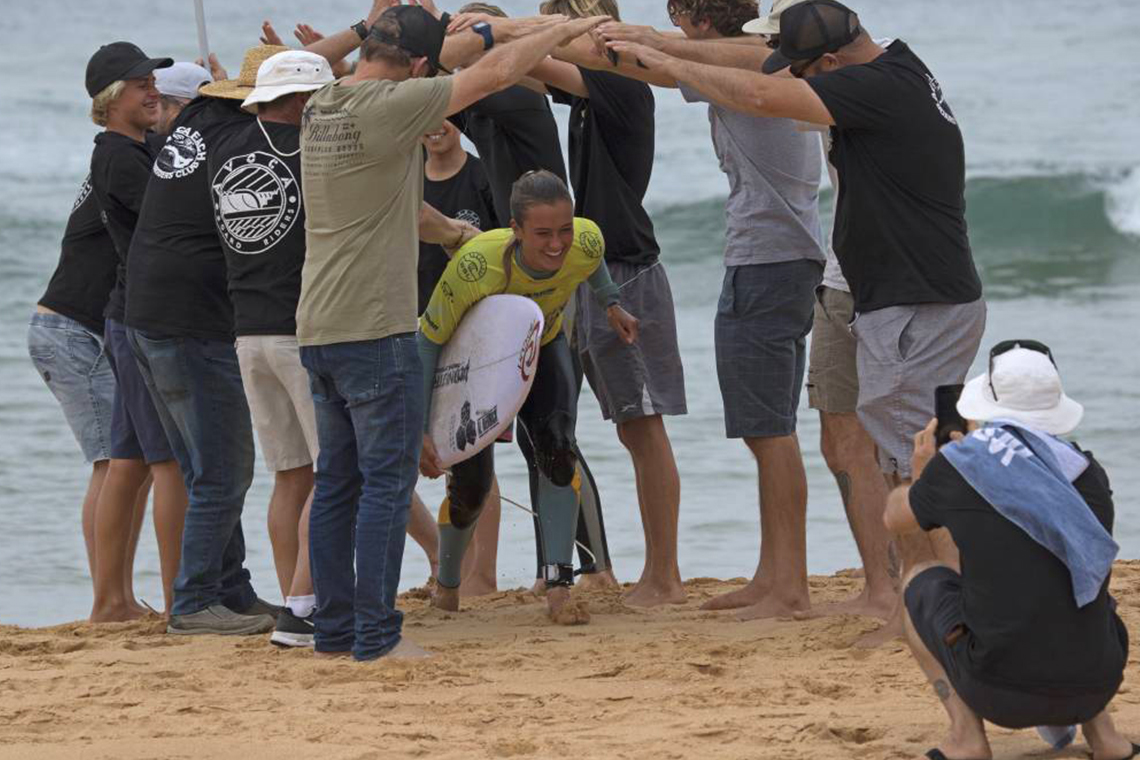 Any young Australian surfer knows the feeling of being a part of a Boardriders club. Whether it be one with a couple of your mates or one that has been going for 50 odd years. A boardriders club gives a young, up and coming surfer a sense of purpose and stability and the feeling of being a part of something bigger than themselves.  A place where one can learn the art of competing, the do’s and don’ts whilst in a rashie, board choice’s, positioning and how to find that mongrel inside to win.

For some it’s a training ground, for others it’s a social opportunity, a time where they can go and have fun with their mates and enjoy some beverages after. For others, it is the one thing that keeps their competitive fire burning, that once a month opportunity to win the voucher or go into the draw to win a week away somewhere exotic but mostly to be able to take out the win for the year and the bragging rights that come along with it.

For most, a boardriders club is like being a part of a family, enjoying a day at the beach with like minded people pushing and supporting you to be the best you can be.

If you ask any surfer about their club you will understand just how invested they are in the one they are a member of. It’s more than a club, it’s a community.

Throw in the fact that every year there is an annual Australian Boardriders Battle (ABB) where boardriders clubs from all around Australia come together to compete to be the best club in the nation. It is a prestigious event held to the highest calibre that every club wants to win at least once.

LE-BA Boardriders was founded in November 1980 by a small group of surfers from Lennox Head and Ballina NSW. Local legend, surfer Brad Myers thought it should be named by combining the names of the two towns in one simple abbreviation and so it became Le-Ba Boardriders Inc.

The club quickly gained a strong reputation as a top level competitive force finishing in the top 5 in the Quiksilver Surf League finals in the early 90’s. Le-Ba has also won the Simon Anderson Club of the year award in 2008 and were the Jim Beam Surf Tag Australian Champions in 2012.

Apart from the main goals of having fun and friendly local competition between the surfers from Ballina and Lennox head they have also put a team together to surf interclub contests with clubs as far afield as Snapper Rocks and Kirra on the Gold Coast. In 1981 the club competed in its first interclub teams competition and has continued to enter all the teams events available to them since then.

“In the last 5 years there has been a significant increase in the number of girls and women competing within our club.  LE-BA has a long history of women participation, since the early 90’s women surfed for LE-BA in team events and still do. Some of the talent to represent LE-BA over the years are World Junior champion Jenny Boggis, Steph Single who represented Australia at the ISA World Junior Titles and our current team surfer Nyxie Ryan who recently finished 8th at the ISA World Junior world titles.  In the early 2000’s there was enough interest to warrant separate women’s divisions in the club which ran for many years. In recent years the increasingly higher standard of the girls surfing has justified having the women mix with the boys and compete against their male counterparts in their respective age divisions.  There are no separate female divisions in the club now and last year our Grom division and Junior Grom division were both won by girls.”

LE-BA provides financial assistance to our top surfers who qualify to compete at the Australian level representing NSW and International events to represent Australia. We provide access to elite professional coaches to develop their talents and offer the opportunity to represent LE-BA at team events. Some of our club sponsors also offer surfboard sponsorships to up and coming girls in the club.

“As women’s participation in sport becomes more equal with WSL events now offering equal prize money, LE-BA boardriders are leading the way for opportunities for women to participate in competitive surfing in our local area.  Having the girls in the club is beneficial in so many ways.  Women need a voice in a sometimes male dominated sport which was definitely the case in the past.  The club gives female surfers an equal status and encourages their participation and involvement.

The massive event that the club hosts every year, the Skullcandy Oz Grom Open, has increased the available entry positions to accommodate growing numbers in the girls divisions so no one misses out on the opportunity to participate at the top level of grom events.  Some of the LE-BA girls you see making a big name for themselves in the sport currently and also those showing great promise for the future are: Juniper Harper, Ocea Curtis, Mia Baker, Leihani Zoric, Keke Brain, Poppy Morrison.”

New to the scene, Culburra Boardriders was founded in 2013, with their first event being in 2014. It was started because of the hot bed of local talent they had in the area. The founders also wanted to have a crack at the prestigious Australian Boardriders Battle which they won in 2018 not a bad effort for a club that was only 4 years old.

Just this year the club has noticed a lot more engagement by women surfers, their numbers picked up and hopefully they will keep rising. They are looking to put some coaching courses in place to help the young crew coming through.

Unfortunately, they don’t have any girls that are surfing in the club at present, other than Tyler Wright, on a competitive level.

The President of Culburra Boardriders, Jason Moon said “Tyler has contributed so much to our club, every chance she gets she comes back and surfs for our club at events or just to  hang out with the kids on the beach playing touch footy, Mikey Wright also contributes his time to help out at presentations and surfing for the club.

I think having women in the club is essential, we have a few girl’s husbands involved in the club and it brings a family atmosphere which we love down here.”

The Ulladulla area attracted an alternative surfer crew, some headed north in the 60’s and 70’s but some headed south – and there they still are. The type of waves on hand brought a certain type of surfer and a lot of really good surfers. Ulludulla Boardriders was founded 1974 by Pete Histon, Jeff King, Bruce Heggie, Dave Matthews, Bob Edwards and Dave Murray with hopes to both organise and improve their own surfing and fellow locals spread out over the surrounding 30km of beautiful coastline.

Over the years things have evolved, the Club now having over 100 members who come together on the first Sunday of the month to share the beach and the waves with family and friends.

“There were always women surfing in and with the club but it wasn’t until the 80’s, when women’s professional surfing grew greatly, that a separate division could be born successfully. I have especially noticed that in the last 3 or 4 years, we are now able to hold a full women’s draw on comp day, composed of women and girls, some of whom have been with the club for over a decade. Although the club revolves around families and friends gathering on the beach and around the BBQ, it remains competitive at its core. Watching the young men and women grow competitively over the years has been such a privilege. Notably, through healthy competition between friends and the constant broadcast of support, backed by local pride, the close-knit local surf community motivates one other, often unknowingly, to always do better.  This local drive is what allows us to keep our club going as we continue to support and improve our surfers by holding comps, training/strategy days and always encouraging participation in team challenges.”

“The women of Ulladulla Boardriders club are involved at every level and their hard work, talent and dedication never goes unnoticed. From 8 year olds behind the till to the committee members, judges and of course ripping competitors, the girls (big and little) are key to the continuation of our club. This year we offered a juicy cash prize for the opens and women’s divisions and those who already love competition have turned up their dial and are sending it to the next level. The feeling of family that our women, competitors and watchers alike, bring to the club is the glue that holds us together.”

2x World Champion, Damien Hardman, is the President of the club and is continuing to grow its stronghold in the competitive boardriders community.

With the ladies of the club winning the Women’s National Surftag 8 times since it began in 2008 the talent that North Narrabeen is producing from the women is growing in strength year on year.

President of North Narrabeen Boardriders Damien Hardman said “Considering women didn’t really start competing in NNBC until the early 80s the club has produced some high quality female surfers and competitive role models such as Sandra English, Evonne Rogencamp, Belinda Hardwick, Elle Northey and Laura Enever just to name a few,  who have all competed on the world tour or QS. All have inspired the next generation of our junior female surfers.”

Jesse and I are lucky enough to call NNBC “our” club alongside Sophia Chapman, Sienna Hinwood, Kyla Whitfiled and a growing crew of young surfer girls. We can only hope that we can inspire the next generation as much as we continue to be by the women that carved out the path before us.

So there you have it, a little history on female surfers from a few clubs around Australia. We would like to say thank you to all clubs supporting female surfing across any level and say to any girl out there that surfs and likes the idea of competing. Join your local club. It will not only better your surfing but it will give you a whole new family too.