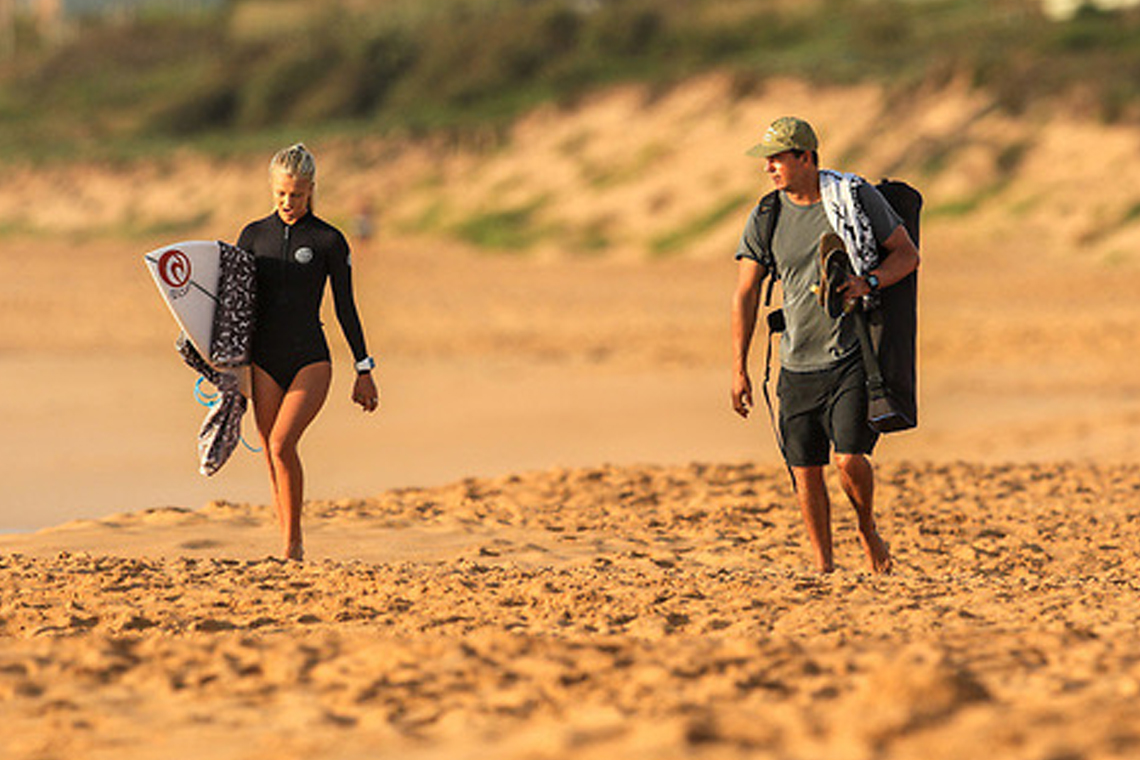 SO, YOU’RE LOOKING FOR A SURF COACH?

I started surfing later in life compared to other competitive surfers (12 years old), Mum pushed me into dance and it wasn’t until Dad found out they had to sit through 5 hour dance concerts every other weekend that he and Mum started taking Jesse and I to the beach, after that dance was a distant memory.

I was hooked straight away and it wasn’t until I was around 14 that I realised I might need some technical help to progress my surfing and competing. Finding the right surf coach is pretty full-on, you have to deal with things like personality compatibility, geographics, finances (it can add up) etc, etc.

What I wanted to do is give my younger self some advice at the beginning of her journey to surf, compete and get training to be better, so here it goes.

Hey 14 year old Tru, so, you’re looking for a surf coach? You’ve got options, a lot of options, but to be the best you can be, narrow your search to the following criteria.

The “energetic positive one”

and the “all rounder”

You just need to find one who suits you, your surfing and your goals and you know what? At times they all will..

Let’s talk about Amee Donohoe, a.k.a the straight shooter. Amee is an ex-professional surfer, ranked 5th on the Championship Tour in 2008 and is now one of few female coaches in Australia. My first experience with Amee was at the 2017 Australian Junior Titles in Culburra. I had just been knocked out of the event in the quarter finals due to some poor decision making (that one stung for a while). I decided that I should go and speak to Amee about the heat to see if I could get any insight on where I went wrong and what I could have done better. As I walked up to Amee and spoke to her, the answer was pretty straight up and honest, she said “Why did you sit there? What were you thinking?” After we spoke for about 30 minutes, I had learnt a lot about Amee as a coach but also myself in the sense that for me to progress in my surfing I needed someone to give me honest and truthful feedback. That’s exactly what Amee does, if you are a surfer who also needs this then Amee is the person for you. Not only is she real about her feedback, she creates a safe environment for her athletes as well as relying on video footage to back up her feedback. If it weren’t for geographical positioning I would be training with Amee a lot more, purely because we connected so well. I asked Amee what her most memorable experience she has encountered during her years of coaching was? Amee’s was when Sarah Baum won the Avoca Pro this year. “Watching an athlete find their optimal zone and confidently maintain that from the start to the finish of the event is really fulfilling when it all comes together. Competitive surfing is full of ups and downs and you really are invested in your athletes goals and helping them achieve them. So at Avoca watching her score nine point rides in most heats and taking down some big names on the way to the final was really cool. It’s seeing that self belief shine, confidence build, and the pure stoke of winning the ultimate result.”

Then there’s ex professional surfer Matt Cattle a.k.a “the technician”, was born and raised on the stomping ground of North Narrabeen, has travelled the world and surfed countless events in his career. After retiring from competitive surfing, Matty ended up working in the surf industry with Hurley for over 25 years. Now, Matty has started his own surf development program and has many young and experienced surfers who are on his program. Anyone who trains with Matt knows that his main focuses are completions and wave selection. Matty focuses on the facts, at the end of each session with Matt he writes up a session review for each surfer including the score of the wave you chose and the score you actually got, he also includes the percentage of waves you made, with the benchmark being 80%+. Matty focuses not only on technique but also competitive surfing, he has coached Jordy Lawler to his win at the Sydney Surf Pro in 2019 as well as Leilani McGonagle to her win at the Krui Pro in 2019. Like Amee, Matty also gives honest feedback and relies on videos to back that up. Matty also looks very closely at the boards you are riding and will give honest reviews on your equipment. If you are looking to be a competitive surfer or someone who simply wants to improve your technique, I’d definitely suggest getting in touch with Matt. Matty always ensures that before a heat he tells his athletes to be “confident and rip in” and he feels like he has excelled as a surf coach when he “sees surfers better themselves”.

THE ENERGETIC AND POSITIVE COACH

When it comes to positive energy Beau Mitchell must be the poster boy. Also an ex-professional surfer for 15 years with the highlight of his career being ranked 23rd, the now turned surf coach always connects well with everyone he meets. When Beau retired from surfing he took on managing Warner Surfboards and also ran the Quiksilver Surfboard Program through Australia for three years, giving him a great insight regarding the industry. He establishes a great connection with his athletes and keeps them motivated and helps guide them out of negative headspaces that can be formed by life and competing. Beau is also very aware of the fact that you need to be physically fit both in and out of the water. When I trained with Beau, we would get up every Thursday morning, all year round, at 5am to meet at Mona Vale beach for surf training. He then started outlining the exercises we were meant to do, these would include beach sprints, dune runs, jumping, yoga and meditation. I would highly recommend Beau for someone at the start of their junior career and ready to build. I asked Beau if he could say only one sentence to his athletes before they paddle out for a heat what would it be? “Believe, believe, believe and trust your instincts.” He would send Davey Cathels an ex CT surfer a text message before every heat saying “believe believe believe” because once you hear something enough you start to take it on.

Then we have Samba Mann a.k.a “the all rounder”. Samba is a retired professional surfer who worked for the Hurley High Performance Centre (HPC), he has coached Barney Miller to a World Disabled Title and also has a rich background in sport psychology. Samba is a coach who focuses on technique, he analyses any videos of his athletes and is great to have during events, he has the experience in heat strategies and is great at analysing them after the fact also. Samba to me is one of those coaches that you feel like you are in a safe environment. He is capable of helping athletes get in the “zone” as he has done with me before and has coached many athletes to some exceptional results. Like Amee, Matt and Beau, Samba is an ex-professional surfer so is able to connect with his athletes and because of his background in psychology, Samba is able to guide his athletes to the mental state that they need to be in before their heat whether that be calm or amped up. If you are looking for an all-rounded coach, Samba is your guy. Samba tells me that his most memorable experience as a surf coach was “Watching two of my good mates win gold medals in the adaptive World Surfing Titles. Matt Formston is visually impaired and I think he’s won 3 in a row now but I spotted for him in that comp and I was the head coach as well so I basically selected the waves for him so it was very stressful, but we won in the last 5 minutes it was so good! Watching Barney Miller win as well as I know how hard he trained and he put his best ever performance in that final and won by a mile I think he comboed the field and we all had tears in our eyes when he came in. It was amazing!!!”

Surfing is a funny sport in the sense that each day, heck, each surf is different. It’s not like dancing where you can go to the dance studio and practice the same routine, with no other contributing factors. Surfing is the complete opposite. You have to think about the wind, the tide, the swell direction, what equipment you should ride, your fins, the crowds.. You get the picture.

So when a surfer wants to start taking the sport seriously, they need someone to guide them through these factors.

So there you have it 14 year old Tru, pick one of these four types of coaches and enjoy the journey… Because it will be amazing.

WE TAKE A LOOK AT THE FUTURE OF TEAM ROXY